Overwhelmed with options this 4th of July? No worries, we’ve put together a list of all the best spots to spend the holiday along the South Shore & Cape Cod!

Have a Safe & Happy Holiday!

All dates are 7/4 unless noted.

9:15 pm – Fireworks on the Barge in Downtown Plymouth

9 PM – There will be music and activities in Aselton Park beginning at 6:30 p.m. Fireworks over Hyannis Harbor begin at 9 p.m. (Rain date for fireworks only is Saturday, Aug. 31.)

5 PM – Come view the Edgartown 4th of July parade and spectacular Edgartown Harbor fireworks. Enjoy delicious treats, sales at local shops, and so much more during this festive time in town! The parade begins at 5 p.m. on July 4 and the fireworks start at dusk on the harbor.

8:45 PM – Fireworks begin at dusk on July 4 (rain date July 5) at Falmouth Heights Beach. Be sure to check out Falmouth PD’s parking and road closure info before you go, and plan accordingly!

July 5th at 9 PM – Fireworks will begin at Jetties Beach.

9:30 PM – This special fireworks display is the culmination of a full day of activities in Sandwich that include a street parade, a boat parade, a 3-mile race and picnic. Fireworks scheduled for July 4 at 9:30 p.m. over Shawme Pond. Date is still tentative. 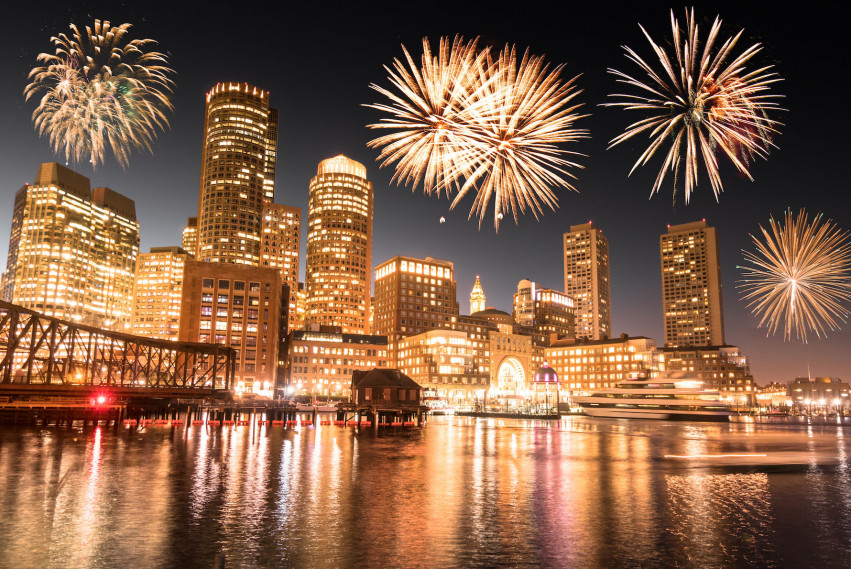 7:30 AM – Old Colony Club march to Coles Hill.  Reading of the Mayflower Compact and Declaration of Independence.

9:30 AM – Plymouth 4th of July Parade from Mayflower Business Park in North Plymouth

The Duxbury 4th of July Parade starts at 2:00 PM in Duxbury’s Halls Corner and travels down Washington Street to the Duxbury High School. Prizes are awarded for community floats. Free Admission.

10:00 AM - The 2019 4th of July Parade Theme is “Celebrate Hingham’s Natural Beauty” as selected by the Parade Committee. Look for Parade Buttons dedicated to this theme at Hingham Centre and downtown Hingham businesses in June.

9 AM – Barnstable / West Barnstable – Don’t miss this 4th of July tradition. Big floats, small floats, bikes walkers, motorcycles and dogs are all included in this parade. It begins at the County Complex on Railroad Avenue at 9 a.m. and proceeds down Main Street (Route 6A), left onto Mill Way and continues to the Village Hollow where it will end with various activities.

11 AM – Cotuit – The parade will begin at the Post Office, proceed down School Street to Main Street.  It will then turn left on Main Street to the rear of the entrance of the Cotuit Elementary School, where it will conclude.

11 AM – Hyannisport – Following the Hyannisport Beach Club 2k Run at 9 AM, the parade will lineup and begin at the Hyannisport Post Office on Longwood Avenue, turning left onto Washington Ave and right onto Lafayette Avenue.  Then it will turn left onto Winchester Ave, left onto Scudder and continue onto Dale Ave to the West Beach Club.  This is where it will end.

2 PM – Hyannis Inner Harbor Boat Parade – Hyannis Marina invites all to a July 4 boat parade at 2 p.m. The best viewing is along Ocean Street at Hyannis Harbor. If you are a boater and want to participate, the boats assemble off of Hyannis Yacht Club and head to the inner harbor to show off their red, white and blue.

5-7 PM – Enjoy family lawn games, free rides by the Roaming Railroad, jugglers and bubble fun on the Village Green in Hyannis beginning at 5 p.m. Nicholas Suchecki Jazz Quartet will perform. There will be pre-fireworks music and activities in Aselton Park beginning at 6:30 p.m. Fireworks over Hyannis Harbor and Lewis Bay begin at 9 p.m. (Rain date for fireworks only is Saturday, Aug. 31.)

10 AM – Bourne on the Fourth of July Parade begins at 10 a.m., rain or shine, on Main Street in Buzzards Bay.

9:30 – 11:30 AM – Chatham’s Independence Day Parade on Main Street, is one of the oldest in the United States. This year’s parade theme is “Chatham Honors You!  Service Members Past, Present, Future!” The theme honors all men and women who served the country in all wars, as well as those who serve during peacetime.

10 AM – The Bike & Carriage Parade begins at 10 a.m. from the Village Green, down Main Street to Peg Noonan Park.

10 AM – The parade starts at 10 AM on Main Street, which culminates in the water fight between fire departments.  Children races and rug of war to begin at 5 PM.

Noon – This popular Fourth of July parade, organized by the Marine Biological Laboratory, begins at noon and proceeds down Water Street. 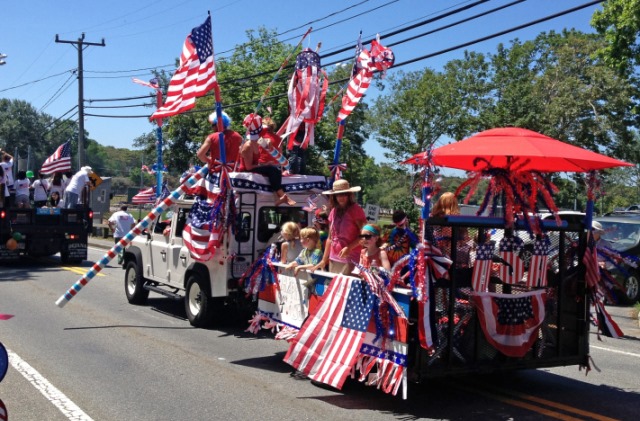