Our team has been crunching data from the South Shore and Cape Cod Association of Realtors® Multiple Listing Services (MLS) every day for the last seven weeks to help our clients and community better understand the impact of COVID-19 on our local market sine Governor Baker put the Stay-AT-Home order into effect.

This report is for single family homes in Plymouth County and Barnstable County. Please note Condos, Multi-family homes and land are excluded.

New Listings: new listings inventory has decreased by 27.39% from this time last year.  In 2019 - 1,289 listings were available in Plymouth County as of May 1st whereas there are only 931 homes on the market as of May 1st.  There was a 19.6% decrease in the number of new listings in Barnstable County.

Price Changes: Sellers are not negotiating. Almost 35% less Seller this year have adjusted their asking prices during their selling cycle than in 2019. Price change data is currently unavailable for Barnstable County.

Pending Contracts: as of May 1st, there is a decrease in the number of pending sales of 16.55% from what the numbers were during the Spring Market in 2019, average days on market remain about the same. Pending data is currently unavailable for Barnstable County.

Closed Sales:  Winter sales and a strong start of 2020 have helped Sold data remain almost unscratched, with only a 1.33% decrease year over year in Plymouth County and a 4.3% decrease in Barnstable County.

Mortgages: mortgage rates have begun to stabilize over the last few weeks as the market searches for direction. Banks continue to watch from the sidelines for forbearance requests to peak. As a result, the only readily available mortgage types continue to be Conventional (Fannie Mae and Freddie Mac), Government (FHA and VA), and A-Paper Jumbo (albeit with tighter credit standards than before).

We are here to help: while there is a lot of uncertainty and fear, and the real estate market and economy overall is experiencing an acute shock, we will get through this together and come out stronger on the other end.  We are here for you to answer any questions and help you find solutions and possibilities during this challenging time.  Please do not hesitate to contact us at [email protected] or call 508-746-0033.

Entering this year, the biggest challenge we were prepared for in the housing industry was inventory, literally not enough homes on the market for the number of people that wanted to buy those.

Today, we’re at 3.1 months of inventory on the market. We literally don’t have an oversupply of homes on the market for people that want to buy them, much different. Oversupply led to the issues that we went into 2008 and faced as an industry.

The next thing we want to look at is home equity and how consumers are using their equity then and now.  This gives a really good picture of 2008 and the three years leading up to 2008 you see on the left side of this image. Eight hundred and twenty-four billion dollars was cashed out as cash out refis during that time.

We know the three years leading to today that number is 232 billion, a fraction of what it was back then.

Back then, people were using their homes almost as an ATM, taking equity out of their homes, putting it into depreciating assets, buying vacations, going on trips, doing things, financing lifestyle thinking this is never going to end. This shows you how consumers are treating equity today, and it’s very different than 2008.

In 2008, when we had homes leveraged to the hilt, that home loses a little bit of value and you literally owe more on the home than what’s it’s worth, people walk away.

People aren’t walking away today with the equity they have in homes, $50,000 or $100,000 of equity in their home. They’re going to stay there, and they’re treating their homes very, very differently than what we saw in 2008.

The percent of median income needed to purchase a median-priced home, and what we know pre-bubble is that number was a lot higher than what it was today.

There’s a lot of confusion out there. We do have one challenge that is, and that’s the job loss. Ten million people lost their jobs the two weeks before Tuesday April 7th.  Now, we're going to take a look at those numbers in a little deeper context.

So, we can see that the vast majority, over 90 percent, will likely get their jobs right back, but again this report was done on March 14th.

So, it doesn’t include the second half of March, and many of the ten million were in the second half. Will they be the same type of workers? No, not exactly, but that data will not be out until May 8th.  But understand that the vast majority of the people laid off are going to come back to work, and we’ll go back to the V-type type of recovery.

Take a look at the graph to the left.  Going all the way back to 1989, and what we see is there is no direct relationship between the unemployment rate and the number of houses sold, and we give you three instances of that.

For the last many years, the unemployment rate has been dropping like a rock, but look at home sales. They remain flat. So, really, there’s not a direct correlation. We understand that unemployment could have an effect, and we’ll look at that effect as we look at how many people, in fact, do lose their jobs. And we’ll look at who those people are and how quickly could get those jobs back.

In the Town of Plymouth, home sales continued to increase through the month of April. Buyers are still actively securing homes despite the necessary precautions put into place during the COVID-19 pandemic. 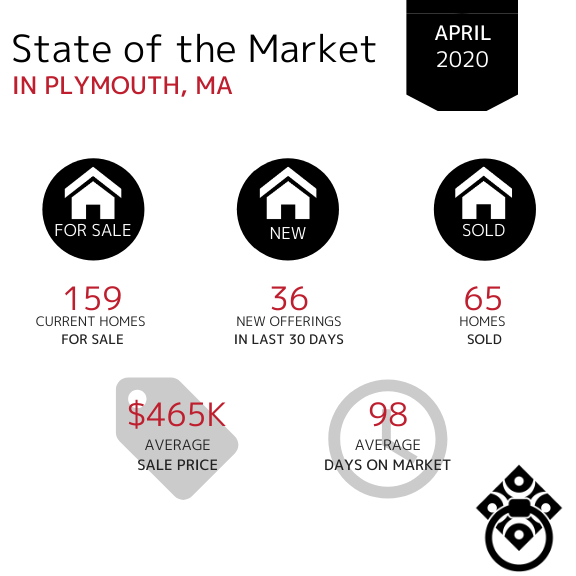 In the Town of Hingham, the market has remained extremely consistent from February through April.  The only significant change was in the decreased number of days on market.  In March the average days on market were 81 vs. 37 in April.  The Average Sale Price of homes sold in April remained at $1.1M which tells us that home values are remaining strong. 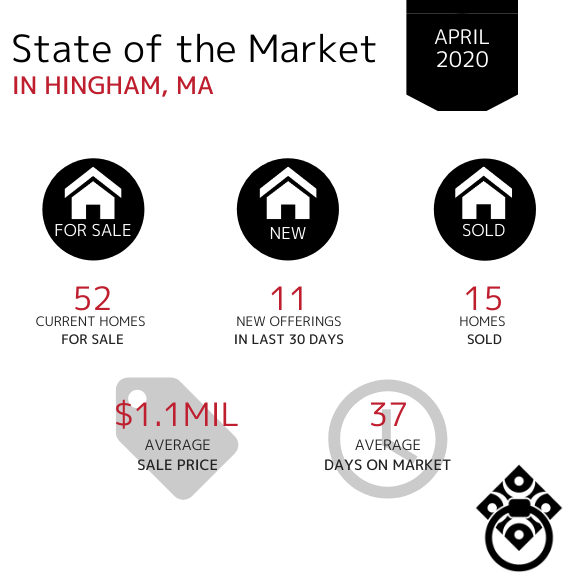 In the Town of Scituate, the Average Sale Price increased by $52,000 in April.  Homes are selling much slower through the month of April, up from 85 average days in March.  The number of homes SOLD also decreased in April which shows a slowing market however homes are still entering the market. 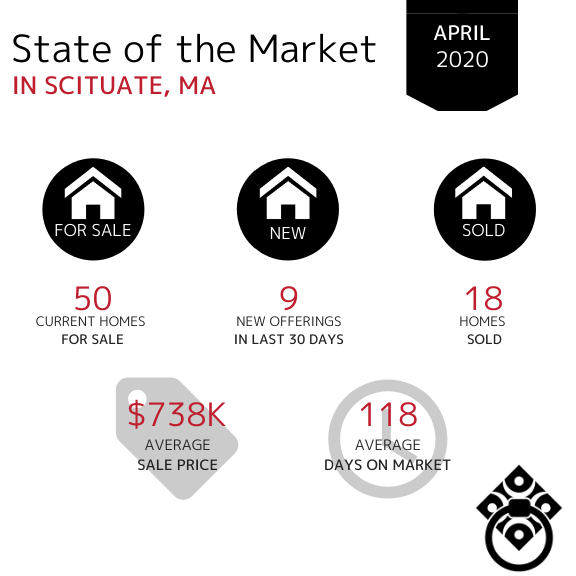 In the Town of Marshfield, the Average Sale Price of homes sold has continued to increase.   Properties are selling at a faster pace - in just under 2 months.  Home Sales and new homes entering the market have remained consistent month over month indicating a steady market. 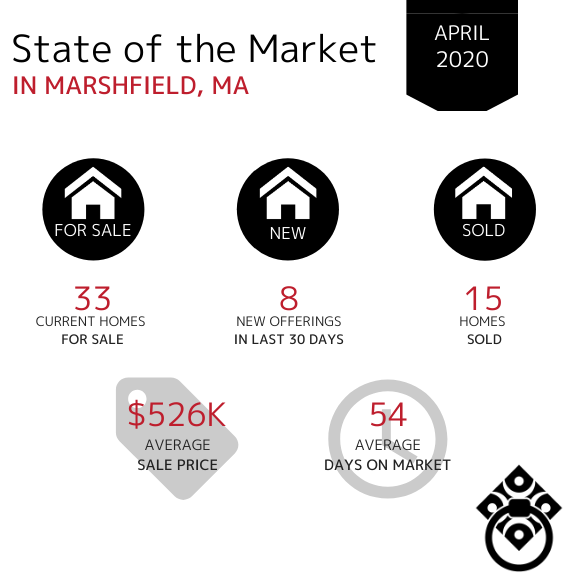 In the Town of Kingston, available inventory has increased slightly however there has been no significant changes.  The Average Days that homes spent on the market increased. The Average Sale price has decreased into the mid $400,000s. 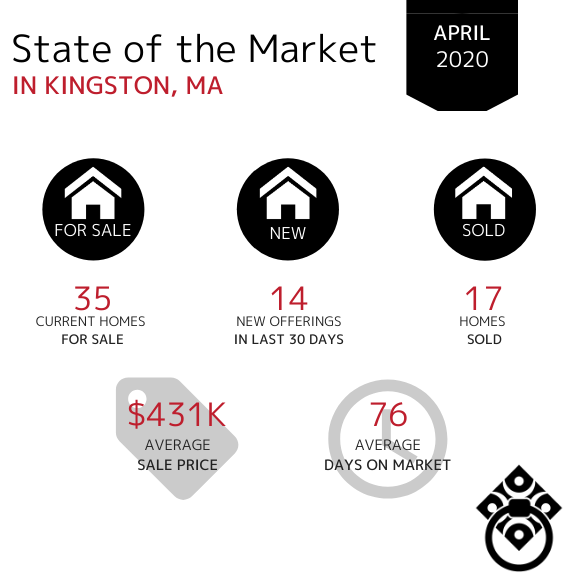 In the Town of Duxbury, the Average Sale Price of homes increased into the million dollar bracket in April.  Available Inventory has increased slightly while the Average Days on Market decreased from 87 to 69 in April.  This indicates that buyers are serious and property values have increased as the Spring market continues. 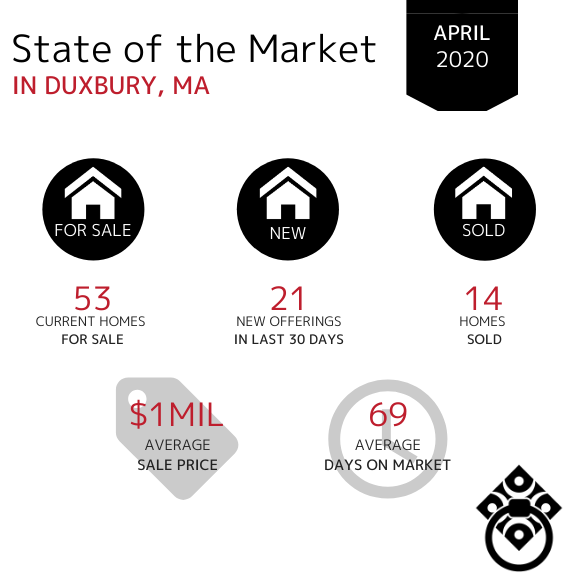 In the Town of Norwell, the average days on market decreased from 87 in March to 46 in April showing a strong sellers market.  There is still a lack of available inventory as we're continue into the Spring.  The Average Sale Price has continued to remain steady month over month. 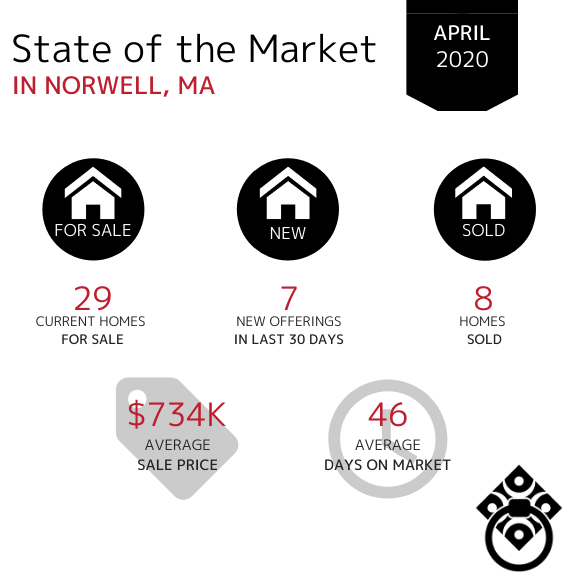 In the Town of Cohasset, the Average Sale Price has continued to remain in the million dollar bracket.  The number of homes SOLD decreased in April vs. March. The Average Days on Market have remained consistent. 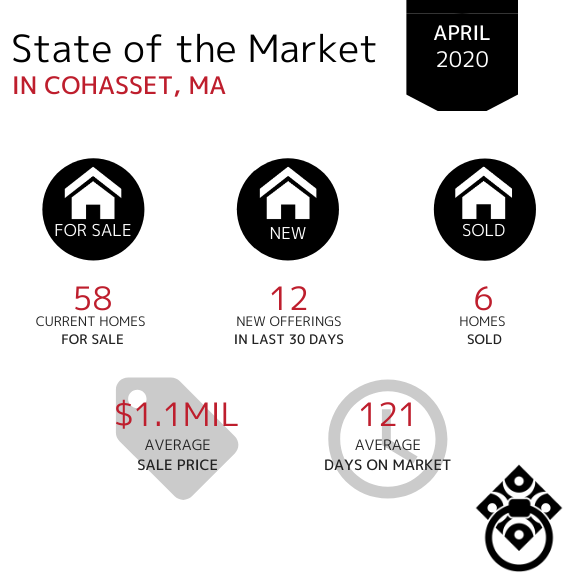 In the Town of Hanover, the number of homes SOLD have increased slightly in April.  The Average Days on Market significantly decreased from 136 in March to 81 in April which indicates an uptick in the market in Hanover. 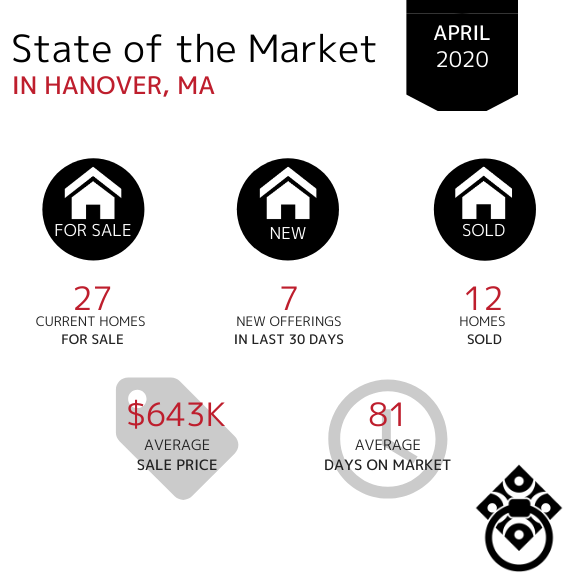 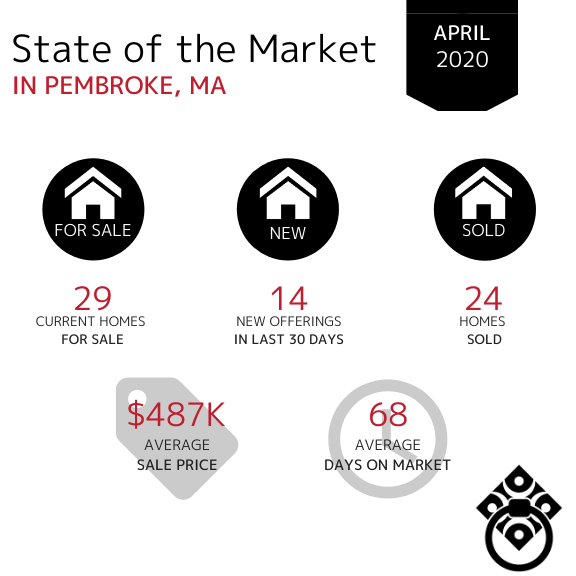 In the Town of Hull, the number of homes SOLD has decreased slightly in April.  Buyers are still active however, with a lack of inventory buyers don't have much to choose from.  Homes remained on the market for a much shorter time than they did in March (111 days).  The Average Sale Price has increased by $113k. 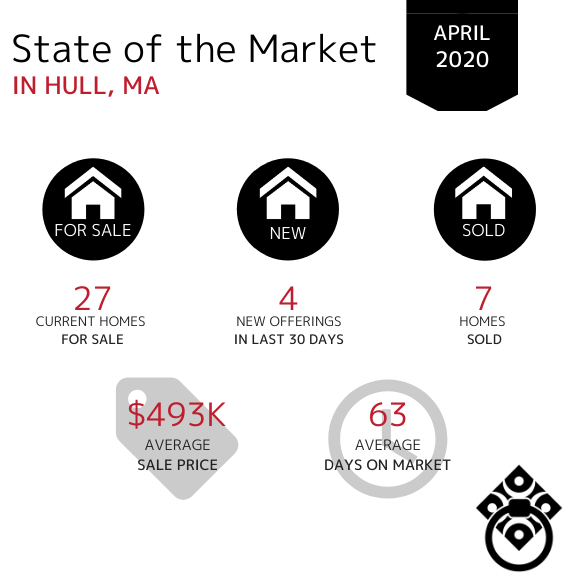 In the Town of Bourne, the amount of available inventory has remained consistent however the number of new offerings in April was only 8.  This tells us that homeowners are not placing their homes on the market in the same capacity they were in March. The number of homes SOLD remained at 17 sales month over month. The Average Sale Price has gone down from $523k into the $400k bracket.  The Average Days on Market have continued to increase which shows that homes are spending a longer amount of time on the market as this point in time. 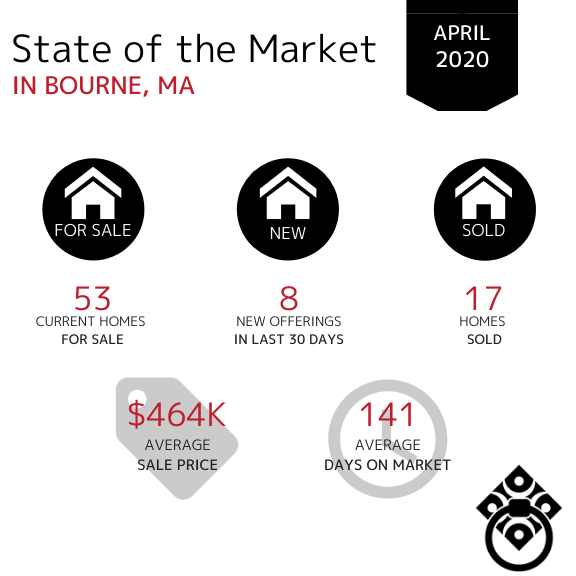 In the Town of Sandwich, the Average Days on Market have continued to increase while the number of homes SOLD have decreased. The Average Sale Price has remained fairly consistent from February through April - remaining in the mid $400,000s.  Available inventory has slightly decreased from March.  This indicates that fewer Sellers are still motivated to place their homes on the market during the Spring market. 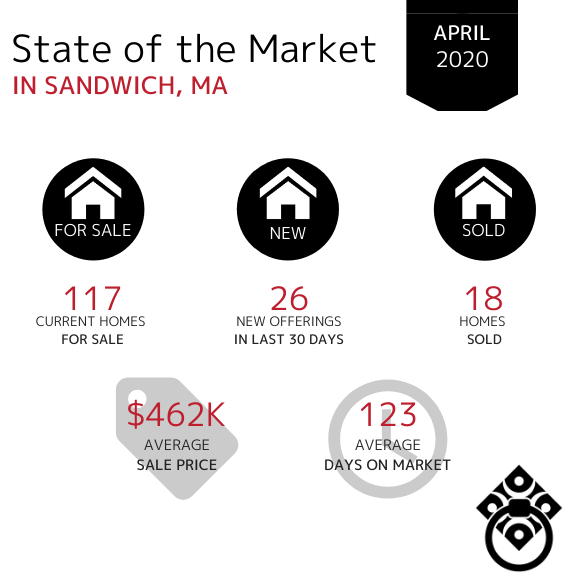 In the Town of Mashpee, the Average Sale Price has decreased from $726k in March to $535k in April.  The Average Days on Market have remained consistent month over month however the number of homes SOLD decreased which indicates that properties are selling at a fastethe same rate but a lower volume. 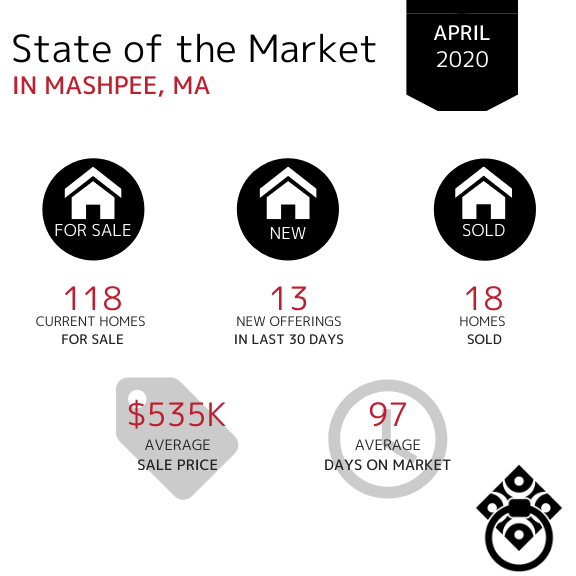 In the Town of Falmouth, the Average Sale Price has decreased from $1.2 million to $679k in April.  The number of new homes entering the market in April was down by 50% compared to March which indicates that Sellers are holding off from putting their homes on the market during what is typically the hottest time of year to sell. The number of homes SOLD also increased indicating a that Buyers in the Falmouth market are actively looking and securing housing even with COVID-19 precautions in place. 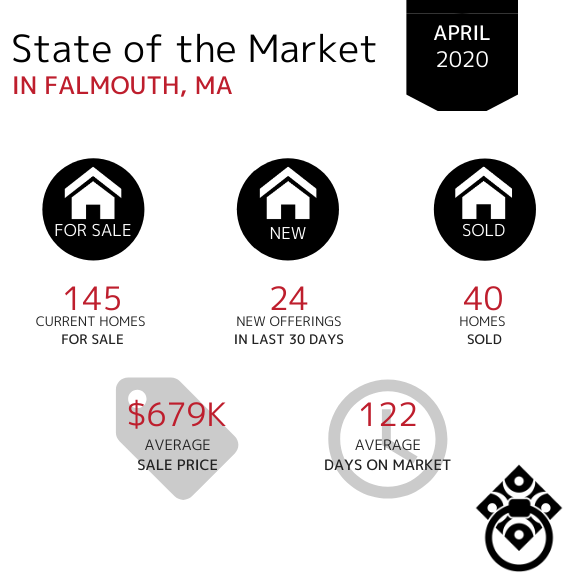 In the Town of Chatham, home sales increased during the month April. The Average Sale Price has decreased from the million dollar bracket as the month of April came to an end.  The Average Days on Market continued to increase in April as well. New homes entering the market in April had slowed down dramatically from the amount in March (31). 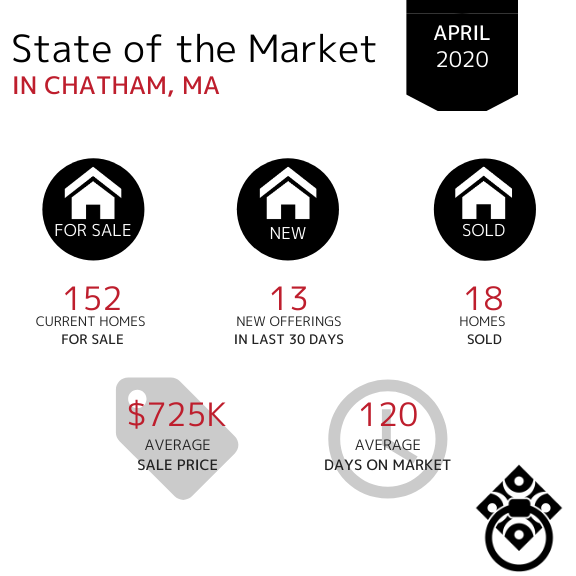 In the Town of Yarmouth Port, property sales are down by 50% in April.  The Average Days on Market have decreased significantly since March however there is a lack of new inventory entering the market which will likely cause the average days on market to rise again. 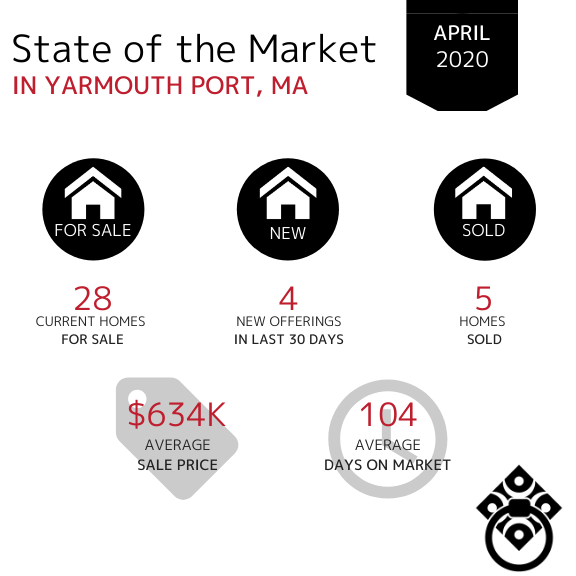 If your town wasn't included in this report,

click here and let us know.  We'll be happy to get you that data!

The next 3 months will tell just how bad the economic fallout from the virus truly is.

Experience matters, now more than ever.

Do you need help? Let us be a sounding board and help you find solutions and possibilities during this challenging time.